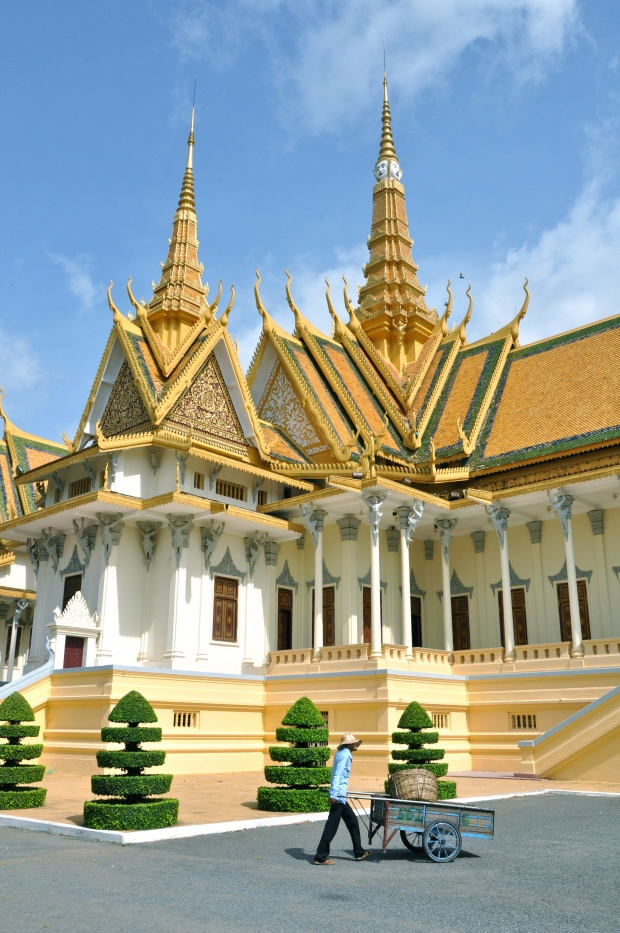 Today was certainly the most interesting part of the cruise and the longest stop we had so far.  Phnom Penh, Cambodia’s main Capital, was once considered as the ‘Pearl of Asia’ and still deserves the title today. The French colonial influence is apparent in the architecture of a number of city’s buildings. The sights of Phnom Penh are largely cultural and historical and you have definitely many places to tour around. This explains why the city remains as Cambodia’s tourist destination.

Last night, we watched a brilliant yet heart-breaking movie “The Killing Fields.”  The movie was based on a true story of an extra ordinary friendship and survival of two journalists.  The movie also brought back the audience of the darkness that plagued Cambodia during the horror and madness of the Khmer Rouge regime.  This seems to have been forgotten by the world today.  The Killing Fields is a masterpiece – perfectly filmed and acted.

We started off the tour with a visit at the home of the Cambodian King, the Royal Palace, built in 1866.  Most parts of the Royal Palace, except for the Kings’ premises, were open to the public. Within the Palace the must see places include the Prasat Prak (Silver Temple).  Prasat Prak was named after its 5000 pieces of silver-made floor.  As you enter the building you will discover a masterpiece of a Buddha statue, made from pure gold along with hundreds of antique gifts, works of art and sculptures. Attached to it are 2,086 diamonds weighing over 90 kilograms (199 pounds) making it one of the most treasured piece of the country.  There is a dress code observed while entering the Royal Palace.  Shoulders and knees have to be covered.  Scarf is not allowed.

After the visit to the Palace we went to the Cambodia National Museum, which was built to symbolize the unique face and body of Cambodia. The museum is located on the north side of the Royal Palace.  It proudly encompasses over 5000 pieces of art, statues, and sculptures dating from the pre-Angkor era as well as the antique traditional dancing clothes, weapons, including the King’s bed.

The variety of sculptures displayed, all in different sizes were very interesting.  The museum has an outdoor garden setting with a water feature, which was beautiful and relaxing to watch – definitely a perfect spot to stop and rest after a long walk.

We ended the morning tour with a visit to the Phsar Thmey, the city’s Central Market. We had ample time to shop and take advantage of the absolutely top-notch prices.  You will find everything inside this yellow domed Phsar Thmey.  The only item you should never bother checking are the jewelries.

At 12.30 pm we were back on board to the comfort ofLa Marguerite. This was part of the trip that I always look forward to after each excursion.  I enjoyed being welcomed back by the crew with a smile as they handed us fresh towel and cold refreshment.

Our afternoon tour started off with a visit to the Killing Fields. The Killing Fields are sites where the hundreds of Cambodians were killed and buried by the Khmer Rouge regime (1975-1979).  An estimated 1.4 to 2.2 million out of the 7 million of the country’s population that time were victims of Pol Potis rule, who was described as ‘the Hitler of Cambodia.’

The sight itself was heart breaking to describe.  This was an optional tour as some folks might find the visit emotional and disturbing.

After the Killing Fields visit, we proceeded to our last stop for the day, the S21 Detention Centre – Tuol Sleng Genocide Museum, which is located in the former Tuol Svay Prey High School (a kilometer or so from the city centre).  The tour was not a happy place to be, but an important and vital part of the tour if you wish to understand the history of Cambodia and what its people went through.

The Genocide Museum was used as the notorious Security Prison 21 (S-21) by the Khmer Rouge regime.  An estimated 17, 000 Cambodians were detained, tortured and murdered if they disobeyed the prison’s strict regulations.  They were sometimes forced to eat human feces and drink human urine.  The unhygienic living conditions in the prison caused skin diseases, lice, rashes, ringworm and other terminal ailments.

Learning about the horrible things that had happened in the prison was absolutely horrifying and disturbing.  I had the chance to meet two of the survivors.  I felt honoured talking to them.  I could not imagine on how they have survived after going through a terrifying experience and imagining the sufferings they had to endure in order to survive.

After dinner, I had a quick visit to a local nearby night market along with Kristine and Ian.  Here you can buy things like souvenir t-shirts and silk scarves, arts and handicrafts, etc. at a much lesser price than what the Central Market offers.

Except for the ‘Killing Fields,’ which is about 15 kms away, all of the major points we visited were located inside the city and within a five or ten minute tuk-tuk ride.  Tuk-tuks are available throughout the day and night at a very affordable price:  A$1-A$2 for short trips and A$10-A$15

for a whole day trip.  Riel (not my family name) is the local currency but US dollars are widely acceptable everywhere, with an exchange rate of $1 to 4,100 Riel.

We were back at the ship before the sunset.  After dinner we were entertained by a traditional Cambodian dance at the Saigon Lounge performed by a local group of orphanage. The guests had the opportunity to learn and dance using wood sticks.  The kids invited the audience to participate and you simply can’t say no as they politely ask you as they pressed their hands together in a praying and bowing gesture.  The oldest couple, which still holds hands at late 80’s on board were just adorable, as they themselves got up and dance.  I was encouraged to join with the group as well. I was accustomed to this style of local dances when I was at their age.

It was certainly a long day but it does not end here.  More to come in Day 6 of the article – a visit to the silk weaving village, and the experience to ride in the local BMW.

In this article, I am delighted to feature APT (Australian Pacific Touring) who fully sponsored my 8-days luxury cruise of the Mekong River. Visit http://www.aptouring.com.au to view list of ALL their product offerings.