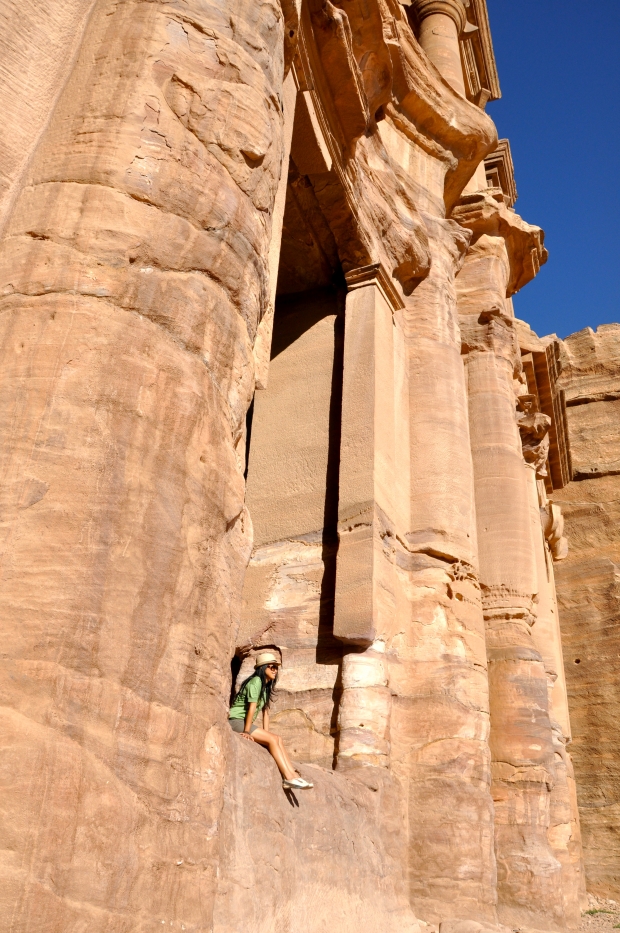 It took me 55 Jordanian Dinar, 7 hours of walking in dusty roads and hills, an hour of hiking to the top of the hill, altogether 850-steps, and 1000 laughs with the Bedouin kids to finally claim that I have seen it ALL, the new 7 Wonders of the World. Petra culminated this DREAM to turn into realities! It was the first time since the beginning of my trip that I was able to utter:  ‘I am ready to go home!’ 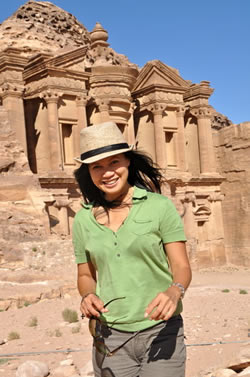 A memory of my seven hours of walking in the dusty roads and hills of Petra, Jordan

The murky political situation in the region did not stop me from visiting Petra. This wasn’t part of my original plan, until I realized after seeing Machu Pichu that Petra holds the key to my long-standing lifetime dream.  I still remember a conversation and consultation I had with my best friend if this trip can be done, and dealt with another ticket reissue.  ‘Sure you can Mich!’ she claimed.

I flew to Amman, the capital of Jordan via Royal Jordanian flight RJ 166, a 60-seater Embraer and so far the best airline of my choice. In the economy class, the lovely and smiling crews offer a 3-meal option (beef, chicken and fish) for any flight over 2 hours. This is akin to a long haul meal option served by other airlines.

Movenpick Hotel was my temporary refuge and made my visit more memorable when I was told upon check in that I have been upgraded to a junior suite.  It certainly put a smile on my face, especially after the 3-hour drive from Amman Queen Alia International Airport.  It wasn’t a scenic drive but as we were approaching to the hotel, a beautiful sunset welcomed my arrival.

After a sumptuous breakfast on the glorious day of Thursday, 2 June, I was so anxious to get out of the hotel.  I was like a little child, feeling excited of what the day brings to me. I left the hotel room at 10 am.

Petra entrance gate was only a 3-minute walk from the hotel.  After a 10-minute walk from the gate, the first scenes that I saw were the rock-cut monuments of Obelisk Tomb and Bab el-Siq Triclinium.  A 7-minute walk later, I saw a signage that eventually directed me to the admirable passage of the Siq (the shaft). 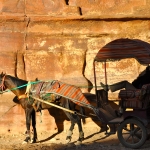 I continued walking and admiring the endless scenes of massive size and incredible rock formations in multiple colours.  Soon enough, I sighted a shadow of the façade of Al-Khazna (The Treasury). Al-Khazna, is a rose-pink colored single block of rock and the most impressive rock monument I have ever seen.

I spotted a solo traveler, Constance, whom I kindly asked to take pictures of me. Constance is a Zimbabwean-American, who is currently working in Dubai.  Interestingly after few minutes of conversation, we started to share our stories of how we ended in Petra.  I was surprised of the decision she made of arranging and booking her travel, 6 hours prior to her flight. Being spontaneous and living in the moment is really is a wonderful thing.

We walked together to explore more of the historical site and both dealt with the insistent Bedouin locals inviting us to ride on the donkey. ‘Hello lady, donkey to the Monastery, special price for you.’ ‘No thank you’ I repeatedly replied.  Finally they gave up on us with an ending remark in their English way: ‘Think about, my name is Mohamed, come see me later.’

Constance and I continued with our stroll until we got to the Basin Restaurant for a sumptuous buffet lunch for 17 JD.  At the restaurant, we met another solo traveler, Richard, who is also a US resident but working abroad.  Richard became my new travel buddy, as Constance had to leave to return back to Amman.

After sharing my goal for the day with Richard, he managed to twist my arms to walk 850 steps uphill to see the summit of the park, The Monastery.  He took over my camera where he was able to capture every little move and steps I made along the way.

The option of embarking on a donkey ride, or commonly called by the Bedouin locals as ‘Petra’s air-conditioned Cadillac,’ was a common offering to tourists.  Bedouin kids were everywhere. I had a few encounters along the way like cute little Mariana, a 7 year old Bedouin kid dressed in her modern dress, shoeless, and clubby-shaped little feet covered with dust.  She kept speaking in some foreign language and at the same time pulling my bracelet saying ‘give me give me’ and then ran away as soon as she saw her little friend.

Along the way we got to chat with few tourists who encouraged us to keep going – ‘its worth it, once you get up there.’ At 3.30 pm we finally made it to the summit of the park, Al Deir (The Monastery). To reach there we had to makemultiple stops for a drink and ice cream treat from adamant vendors. We were definitely blown away by the scene. It was definitely more dramatic and bigger than The Treasury.  Richard was right; it is not about the number of steps, but the end of the quest.

Opposite from the monument was a coffee shop, where we took some moment to relax and enjoy the view of The Monastery.  Here I met Gabriel from UK, who is studying in Amman, along with her friend.  As a resident international student of Jordan, Gabriel only had to pay 1JD for the entrance fee.  At 4.30 pm, we all decided to start walking back in time for the happy hour from 6-7pm. 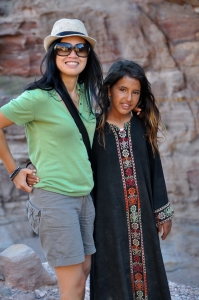 Along the way we met another beautiful and innocent looking Bedouin kid, Tama. She has a noticeable mark of scars on her face; evident of the hardships she went through. Tama was wearing a long modest traditional black dress that complemented her gorgeous long hair. I must admit that I am a softy when it comes to beautiful kids. We enjoyed chatting with her. She has a good command of the English language, and surely speaks other languages.  She handed me both her hands and said ‘Come I take you to see the lion and fish’ as she pointed the way.  We climbed up together to get to the passage look out.  We followed her and true enough, we witnessed another hidden area of excavated Petra lying behind another rock:  a figure of the lion and fish curved on the façade of the rock- cut monument.

We then walked back to the pathway where her donkey was waiting. I had the chance to ride the donkey for a photo shoot. And then the funny and suspicious encounter began.  Surprisingly, as I was pulling out my wallet to give her a tip she said ‘Lady no money.’  ‘Okay what can I offer you instead’ I insisted.  ‘Something from your country’ she replied.  I had nothing else but a plastic whistle that I bought from Ecuador.  I pulled it out from my wallet and showed to her how it worked.  At that time, I felt I should give her some tip but she continued to refuse. Instead, she suggested going with her to visit her village. She was a real charmer, and whilst it might sound interesting to do, my immediate gut feeling was to decline her gracious invitation.  When I expressed to her that I couldn’t she then suggested that she needed to get a pair of new shoes. I handed her 5 JD but she explained to me that the shoes costs 10 JD.  I told her to keep the note and start saving until she has enough to afford to buy the pair of shoes.  She then took the note graciously.

As we continued walking, she asked for another favour, this time she wanted an ice cream. That was the breaking moment that I decided to ignore her. And then she started getting into a tantrum and even attempted to return the 5 JD notes I gave to her as well as  the plastic whistle. We continued to ignore her. Suddenly, she ran ahead of us and found a wooden box along the way and acted to place the money on the bench. ‘Lady I don’t want your money,’ and left it on the bench and walked away. As we continued walking and ignoring her, she finally gave up and walked away with the money.

By then, it was already 6 pm, and we still had a good hour to reach the hotel. We were convinced to skip the happy hour.  The last 30 minutes walk to the hotel was the challenging one but it was the stiff drink calling out that pushed me to keep going.  At this time the park pathway was being set up with candles for an evening Petra experience.  At 7.30 pm I made it to the hotel. It was a long 9 hours and 30 minutes day out. I was totally exhausted but the breathtaking memories of that day; the 508 photos and the interesting encounters with the Bedouin kids wrapped up the daylong activity.

On Friday, 3 June at 2 pm I was ready to endure another long drive to Amman Marriott for an overnight stay.  Ibrahim, the driver, spoke better English and managed to negotiate a good price for the scheduled day tour I planned to Jerash and the Dead Sea for the following day.  As a reminder, always shop around for transfers to/from Petra as I was surprised to find out that Movenpick was able to offer a better price.

Security is a big deal in Jordan.  Upon arrival at the hotel, it was a requirement that luggage have to go through the security machine before entering the lobby.  Even inside the park of Petra, security police quarters are widely visible and available so security and safety is highly upheld in this country. 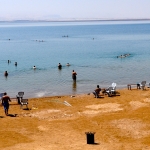 Bassam picked me up at Marriott Hotel at 9 am on Saturday, 4 June, for the scheduled day tour. After a 45-minute drive, we reached our first stop, Jerash, the second most visited ancient Roman ruins in Jordan.  Here you can spend a good hour or 2 to see the entire quarters and its impressive lines of columns.

By 1 pm, we arrived at Amman Tourist Beach and had a buffet lunch and a quick dip to the Dead Sea.  Having been to the Israel side of the Dead Sea, the Jordan side is much more scenic and easily accessible to the hotels’ zone offering a number of luxurious 5-star hotels to choose from.

At 10.30 pm I was back to my secondary home, the airport. After a few hours of wait, my flight was ready to take off to my 40th flight bound for Oman, a Royal land with full of surprises.