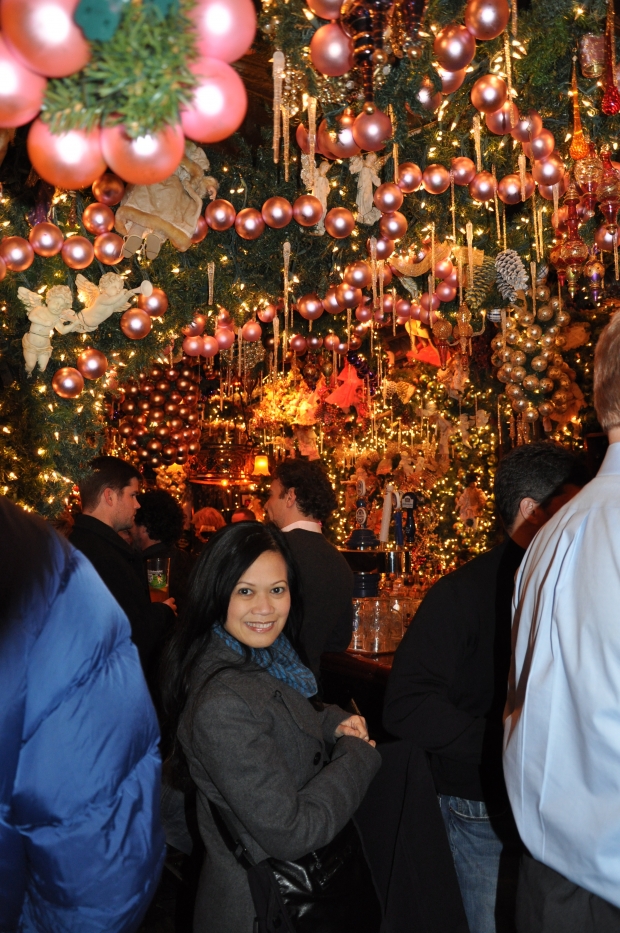 Last month, at Library Hotel, I met Lina Lopez, Food & Beverage Director of HK Hotels.  Through Lina I found out that there are 3 other hotels, Hotel Elysee, Casablanca Hotel and Hotel Giraffe, that fall under the small boutique luxury hotel collections, HK Hotels.

I found myself a hidden gem with a touch of ‘Country Comfort Inn’ combined with an elegance and romance in the middle of the Metropolis.  Through email, Lina introduced me to Adele Gutman, Vice President Sales and Marketing.  Adele kindly extended an opportunity for me to stay at Hotel Elysee, which became my calm comfortable oasis for 3 nights whilst the streets of New York City were covered in snow.

The moment we walked through the front doors and lobby of Hotel Elysee, I felt at home.  The check in staff was very friendly and took the time to go through the hotel facilities. I was thankful that they assigned us to a relatively nice room and quiet floor.  This experience certainly gave me an assurance that from here on out I had nothing to worry about.  It also gave me a relief from the strain of getting to the hotel.  The key was not handed to me but to the porter who escorted us to the room.

I was enchanted with the place the moment we walked inside our room.

The door was small, and walking through the hallway seeing the elegant king size bed, the room decors – the chandelier, antique furnishing, and beautiful paintings – made me feel that I was in a couple’s paradise!  The hotel room layout was functional and I felt at home – exactly the abode-feeling I needed that very moment while the streets of New York was akin to a ghost town.

The street conditions did not stop us from leaving our room.  After we settled in, whilst the sky was blue and the streets of New York were white and icy, we bravely walked to the closest subway to get to Grand Central.  From Grand Central, we attempted to get to Bryant Market but gave up and instead attempted to take a taxi back to the hotel.  Luckily we managed to get one after 3 attempts.  It was an exhausting day!

We culminated our night at the Club floor at 5pm to savor some complimentary wines and great selections of cheeses, nuts, olives, grapes & strawberries. We also opted for healthy choices of baby carrots, grape tomatoes, and cut cauliflower, broccoli and celery.  The friendly server was attentive in refilling our drinks.  Service was superb – warm and very welcoming.

On Tuesday, the 28th of December I met up with Adele Gutman to have a casual chat.  She was very proud to say that all 4 hotels rank in the top 5 New York hotels by the members of TripAdvisor.  Having seen 2 of the 4 hotels, I do not question why.  Any of the 4 hotels are highly recommended and guarantee great comfort, elegance and warmth to customers.

On Wednesday, the 29th of December at 5:30 pm, I met up with my friend Cesar at the Elysee who introduced me to his friend Thinh.  Thinh was born and raised in Da Nang, Vietnam but will be living in New York for the next five years to pursue a Ph.D degree in Pharmacology at Cornell Medical School and a Masters in Bio-Organic Chemistry at Columbia University.  Whoa that’s a mouthful of academic pursuit!   We originally planned to go to a party that evening but luckily I managed to change the plan and have dinner at Rolfs Restaurant, which I originally planned to do before Christmas.

I have seen many giant Christmas trees outside but dining at Rolfs was an amazing experience because it felt like you were inside a Christmas tree trapped with all kinds of Christmas decors.  I did not know about this place until my friend Claire told me that it was a must see place.  It was entirely covered in beautiful Christmas decorations.  I was fantastically surprised the moment I stepped inside the restaurant – the place was amazingly crazy!  You could stare at the ceiling forever and admire its extravagance. The bar was crowded and even though we had a reservation, the expected wait was at least 30 minutes.  But thanks to Cesar’s charms and diplomatic skill, we were seated in 15 minutes.  However, this place was not perfect.  The food and service did not compare to the quality of the ambience. The food was very ordinary yet pricy and the service was relatively slow.  But all in all, the experience was worthwhile.

On Thursday, December 30th, 4 days after the blizzard, the road plowing and clearing were still going on. I moved to NY Palace that day for my last 3 nights in New York along with my cousin Leonie.

On New Year’s Eve, I visited the Tower Club Floor of the NY Palace Hotel for pre dinner drinks, canapés, and dessert.  At 9 pm, we decided to walk from the hotel towards 7th Avenue to witness the descending of the famous New Year’s Eve Ball. We finally made it to the 7th Avenue and witnessed thousands of spectators gathered in Time Square.  The atmosphere was absolutely incredible and just being there was an experience to remember.  After standing there for an hour, we decided to go back to the hotel to witness the ball dropping on the big TV screen from the comfort of our hotel room. I know, it was a waste of time!

On the first day of 2011, my friend Cesar came to the hotel at 9.00am to join me for breakfast at the Club Floor.  It was at that moment that we found out that a few of the Saudi Royalties were staying at the hotel.  We also found out that the Assistant to one of the Saudi Princes, is a Filipino and hails from the town in which I was born.  I had the opportunity to meet up with Michael, the Assistant, that afternoon.  We spent 2 hours having a tête-à-tête about his glamorous job over a cup of tea.  One thing I realized is that he gets to travel on a private plane. Michael, however does not seem to have free time for himself as he is on call 24/7.  He has been in NY with the Prince for at least a month but he has not even had the opportunity to explore the city of NY.  He has to wait for the Prince to wake up and tell him what he needs for the day.  Michael has been working for the Prince for 6 years now, which is a testament that the Prince is in fact a good boss.

Sunday, the 2nd of January, marked the 58th day of my total stay in New York, which ws also my last day in North America.  I was very much looking forward to the next phase of my travels.  Part of me ws sad but I have all pictures collected and stored in my laptop and the countless friends I laughed and had fun with kept in my heart.

I know that I will leave North America with distinctive memories of New York, the city that never sleeps; Boston, the most adorable city; the historic DC, the heavenly Niagara Falls and the true heart and soul of the city of New Orleans.  However, the times I shared with my cousins, uncles, aunties and friends will be most cherished.

Cusco in Peru, will be my first point of arrival in the new phase of my journeys.