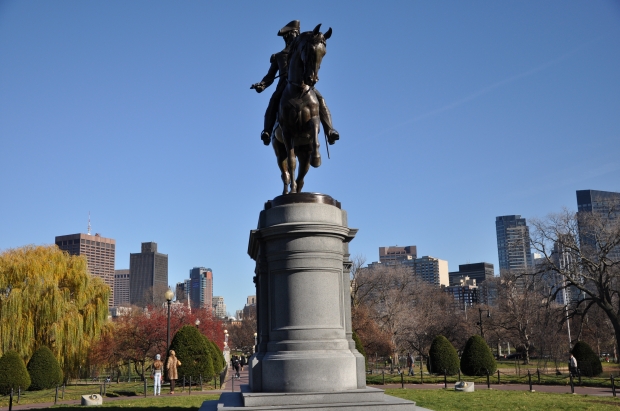 Just like how the song goes, “…like a million miles away from me you couldn’t see how I adored you, so close, so close and yet so far away.”  The memories that Boston brought to me are attributed not only to the many interesting and beautiful places I visited but also to the warmth of the Bostonians, which added perfection to my visit.

On Saturday 27 November, I once again enjoyed a 4hr.16mins scenic Amtrak Service 160 Northeast Regional ride after a brief yet eventful stay in New York during the visit of my friend Carol.

Stonington Connecticut Marina, halfway to Boston, was the most enjoyable and memorable scene I have witnessed. This beautiful town is known for its historic homes by the water, a showground for small boats enthusiasts and lovers of all types of yachts.

I arrived Boston at around 1.30pm and finally got to my hotel, The Marriott Courtyard Downtown/Tremont, after 5 mins cab ride from Amtrak Boston South Station. The hotel supports its neighboring restaurants to deliver to the hotel and you can order online, as high speed Internet is complimentary in the room. That night, I decided to have Chinese food delivered to my room.  If you ever need a late night snack, there is also a small food stand located within the hotel lobby called ‘The Market’.  Another complimentary of the hotel is free breakfast for kids under 12 yo.

Sunday, 28 November, I got myself a city map from the hotel reception and started to explore the city by foot.  The Marriott Courtyard is located in the heart of the Theatre District and is within walking distance to a number of many beautiful iconic spots. I started my walk along Tremont Street heading towards the Waterfront and stopped at the Faneuil Hall Marketplace which houses a number of fun and exciting places to shop and eat. I also enjoyed watching the cruise boats pulling into the Marina Bay as well as the number of planes taking off from the Boston Logan Airport.  It was an afternoon filled with fun and frolic sightseeing.  I went back to my hotel via Atlantic Avenue and on my way;  I decided to pass by Chinatown, which is a few blocks away from the Courtyard.

Boston Chinatown is not as big and crowded as New York and San Francisco. No problem for you to navigate around the block.  It has lots of great authentic food and interesting gift shops.  I decided to have my dinner at a new restaurant located on Beach Street, Bubor Cha Cha, which is an Asian restaurant.  The restaurant’s menu has an overwhelming list of and pages of pictures.  I refrained going through its pages and decided to have a bowl of soup. The serving was huge, so I decided to take the left over back to my hotel room.  The value of food was good but not the best Asian restaurant I have been to.

Monday 29 November, I left the hotel with the intention of walking to the closest T station (subway).  Instead, I decided to walk and take advantage of the beautiful sunny day exploring the neighboring Cambridge District and the university main campuses of Harvard University and MIT across Charles River.  This was a 4-hour entertaining walk from the hotel.

I started my walk through the Public Botanic Garden then through The Esplanade to cross the Longfellow Bridge (also known as the Salt and Pepper Bridge) that connects Beacon Hill, Boston to Kendall Square, Cambridge across Charles River. It also connects to the Marina Drive and Main Street. The Main Street leads you to MIT where I noticed numbers of police cars/bikes, and policemen policing the campus following a woman being assaulted the Friday prior in campus.

I decided to keep walking towards Mass Avenue (short for Massachusetts Avenue) where I stopped at one of the McDonalds for a quick drink before I reached to my final destination – The Harvard University.  OMG – what an institution! I spent another hour strolling and exploring this prestigious campus.

It was 4 pm when my legs were screaming to retire.  So I decided to take the Orange Line using T (subway) to get back to Park Station, the closest station to the hotel.  I walked through Boston Common on the way back to the hotel.  By then, I felt so hungry and decided to stop by for an early dinner at Jacob Wirth Co.

Restaurant, a German friendly and casual restaurant.  I noticed it the other night and was curious of what it has to offer since it looked really busy inside and made me think that the place is good.  I made a safe decision by ordering a small pizza and a glass of wine.  It was just what I needed.  Although I opted to be seated in the corner, I noticed how attentive my waitress was.

I got back to the hotel and noticed a computer with a printer in the lobby available to guests.  I then decided to work on my flight to Columbus for the following day.  I was able to check-in online and pay for my check in baggage.

As a fist time user, I found it very simple and user friendly.  It’s always highly recommended to pay for your check in baggage online, as it is cheaper than paying at the airport. The only feedback I have against US “online baggage checking in system” is that you will be required to log into your email to obtain the receipt for this specific transaction I ended my last night in Boston with a drink at Encore Lounge – a nice cozy little bar at Courtyard hotel lobby. Encore Lounge has a live band entertainment that starts at 9pm.

The band usually consists of a drummer, guitarist and a pianist. That night, 3 singers from the audience performed with the band.

These local talents perform in different bars, but every now and then they have a reunion in this bar to share each other’s talents.  The three singers each sang a Christmas song – Oh! I suddenly felt homesick!  Two members of the band are relatively young – more or less in their late teens.  Tyler, the base player and Danny, the drummer.  Danny is about to launch his first CD the following Friday which covers pop/country/blues music.

That evening I met Ilene.  Ilene is of Turkish heritage and preparing to get into law school at the Harvard University. We were also joined by Jim & Rick who are both in Boston for a business trip.  Jean, one of the local talents and originally from Singapore, also joined us.  She was the designated lyrics online searcher of the night.  She would surf from her mobile when they don’t know or not familiar with the lyrics of the song requested by the spectators – where would you be without Google, right?  Steve Heck, the lead member of the band, was not just a talented musician but also a respected Professor from the UC Berkley School of Music.  He holds a room, in the College of Music, named after him.  The last performance they rendered was my requested song – ‘My Eyes Adored You.’ And I would say that Heck’s version was definitely better than Frankie Vallis.

My flight on 30th November was scheduled to depart at 3.30pm. A day prior to this departure, I arranged my shuttle transfer and pick up at 2pm, with the hotel concierge, for a 2 hour extra time and use this to see more of Boston.

I was lucky that it was a nice and crispy morning.  I decided to spend my two hours walking around Copley Plaza where Trinity Church is located. Trinity is considered as one of the best architectural masterpieces of America and the most visited church in the US.  From here, I walked towards Newbury Street and then to the famous Beacon Hill where you will find some gorgeous historic homes built along the picturesque cobblestoned streets.

This place is definitely Boston’s hidden gem, and a place where I would love to live in. Newbury Street is the Rodeo Drive district of Boston. It’s where you will find boutiques showcasing lines of high-end designers.

I like the energy of Boston, not only the fact that it’s a university belt but Bostonians in general are very friendly and helpful which made it easy for me to approach someone for directions.

I closed my two-hour time with a quick lunch in a nearby Chinese Restaurant, Shanghai Restaurant, before I headed down to the airport to catch my flight for Columbus.

When in US, I am convinced that train is my preferred corridor to the neighboring US/Canadian cities.  The check-in process is less complicated:  no long queues and wait. You definitely won’t get into the trouble and discomfort of taking off your shoes, removing your belt and pulling out your laptop, etc, and most of all no travel delays.

Boston to Columbus via Philadelphia marked my first delayed flight.  The first leg of my flight arrived late in Philadelphia, which only gave me 7 minutes to transfer from Terminal B10 to B2 to catch my connecting flight US3359.  After all the hassles and stress to make it on time for my connecting flight, the moment I seated comfortably on the aircraft it was announced that my connecting flight is delayed for another hour. US3359 had a GPS alignment problem where the system has to be shut down for at least 5mins to work on it.

Further delayed was experienced for a good hour at the gate since 7pm is the busiest time for flight departures in PHL. By the time UA3359 was ready to take off, our aircraft was on No.9 in line.

Regular updates were announced and the only thing provided to pacify the passengers was free water.  The good thing about all these delays was the ample time for my luggage to be transferred to my connecting flight.

I finally arrived in Columbus at 9.10pm. My first day, 1 December, was memorable, as I witnessed the snowfalls outside my Auntie & Uncle’s house. The snow painted an image of an old fashion Christmas scenes that I normally see on Christmas cards and postcards – beautiful houses on the lakes with snow coating their rooftops and in front of the gardens.  My visit in Columbus was very much up lifting.  My Uncle Basil, who’s the older brother of my father, holds the key to my father’s side family history and his childhood.  And my Auntie Fe (who also happens to be my god mother) has a special place in my heart since my childhood life.  I am very grateful for their unsurpassed hospitality, love, support, dignity, value and generosity.  And to top it all for sharing with me their simple but happy senior life and for proudly introducing me to their gazillion friends.

I also had the opportunity to attend my Uncle & Auntie’s organ group Christmas lunch get together where they had ‘Seth Rye,’ a well know organist based in Florida, performed at the event. I was also fortunate to experience the endless house parties, where authentic Filipino dishes, which I haven’t tasted for a long time, were served as the main course and dishes.

My memory of my second visit in Columbus will remain in my heart and has painted a special part of my trip.