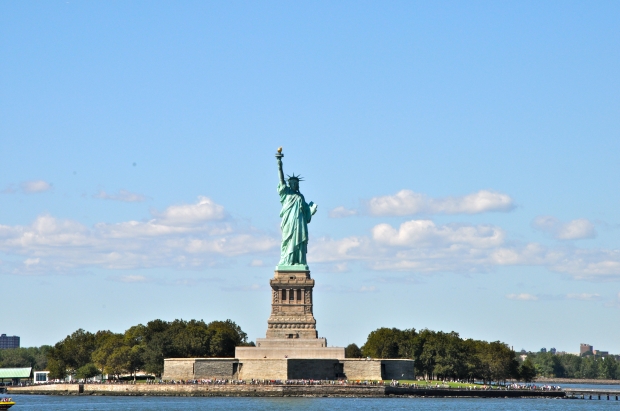 Carol Mills, a good friend and a Travel Counsellor from Melbourne, bring this week’s article to you. Carol came to New York to pay me a short visit. Carol and myself have traveled before and always enjoy each other’s company. This visit has once again painted a trip filled of fun memories.  Carol, thank you so much for meeting me during my travels, and glad to see you made it finally to BIG Apple, the most loved city in the world:

After a long and tedious United flight from Melbourne, I finally arrived at the New York Palace in the wee hours of 23rd November.   The 2 hrs 40 mins lay over in LAX went by quickly that I barely made it to the last flight of the day to NY.  The super shuttle from JFK was relatively cheap and efficient and thankfully it only made one stop.

We woke up the next morning to a beautiful crisp NY day.  Taking advantage of the clear blue skies, we decided to put the Empire State Building on top of our day list to go. 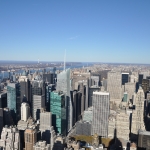 Before we started our day sightseeing tour, we took advantage of the hotel complimentary chauffeur service to Eataly to start our day with a brunch.  Eataly is a fabulous high-end eatery situated just right across the Flatiron building.  After the sumptuous brunch, we headed down to the Empire State Building and joined with the long tourist queues all excited to see the amazing view on the building’s 86th floor observatory.  Expecting to see a better view of the city, we paid extra to go to the 106th floor which I think was slightly a bad decision since the floor is small and glass-covered which makes picture taking difficult.  After witnessing the breathtaking view of NYC skyline, we took the subway route no. 1 to the Staten Island Ferry Terminal. The ferry service is free and departs every 30-minutes and it gives you a close view of the Statue of Liberty. The ferry ride is appropriate for those who don’t want the in extensive tours.  I must say that no visit to NYC is complete without a trip to these two famous historical landmarks.

On our return, we decided to walk and passed through Wall St and Ground Zero, which of course was quite thought provoking.

From there we braved the dirty and confusing subway again, which made me vow to opt for the cheap and often-faster cab ride in the future.  Before we finally decided to return to the sanctuary of the elegant and classy New York Palace, we stopped by the Rockefeller Centre to have a gaze of its most celebrated Christmas Tree. The center is a classic New York City destination for holiday visitors.  Around the tree is an ice-skating rink and it’s a spectacular moment to witness ice skater lovers enjoying the cold weather activity during this festive season. 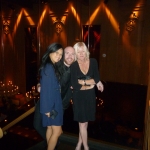 After enjoying our first but absolutely most needed cosmopolitan cocktail drink at NY Palace, we headed off to the fabulous Buddakan for dinner.  I must say the level of service everywhere in NY amazes me but at Buddakan the level was particularly impressive. I commend our server Paul, who insisted that he gives us another glass of red as we made a mistake of ordering a Malbec Rose. The food was to die for and I would especially recommend the Crispy Chicken.  But the highlight was the ‘Crying Chocolate’ – OMG, it’s worth the cost of an airfare on it’s own!

On returning from a trip to the restroom, disaster struck as one of my shoes broke rendering it completely un-wearable and there was no way I could return to my Cosmopolitan in the bar with bare feet!  A wonderful waiter, Josh, rescued me who not only repaired my shoe but spent considerable time making sure the other matched. 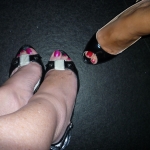 Using his incredible talent and the presence of a masking tape, it gave it a completely new style!  I am eternally grateful. It was a true comparable version of a Cinderalla Story!  Josh was my knight in shining armor that night!  Suddenly, a young gentleman, casually but smartly dressed approached us and asked us if we were enjoying our evening.  We found out later that he was the restaurant Manager.  We told him nothing but praise about the restaurant service. The next thing we know was another cosmopolitan was handed to us. 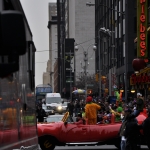 Next day, Thursday, 25 November was ‘Thanksgiving.’  We decided to join the multitudes of spectators of the Macys Parade  – lots of fun and a wonderful atmosphere. We did plan to have a Thanksgiving picnic at the Central Park, however, that thought did not eventuate due the freezing cold weather but we did have that pumpkin pie at a nearby café from the hotel, and I also made sure to try a NY hot dog from the sidewalk stall.  It rained in the afternoon but this gave us a chance to visit the historical Grand Central Station, the major transportation hub for NY commuters, as it was only few blocks away from NY Palace Hotel.

That evening we joined a friend for a dinner at The Standard Grill in the Standard Hotel – a hip and modern  boutique hotel in heart of the Meatpacking district, for a very reasonably priced Lobster Dinner.  For fun, you can try one of their cocktail punches served in a magnum glass. The table next to us ordered one of these cocktail drinks. Michelle, of course could not resist but to have her favourite dish on the menu – this time she tried ‘The Deal Closer,’ a bowl of chocolate mouse with whipped cream. 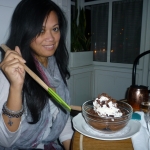 We met few people that evening but we remember the most were the ‘dos’ Orlando & Eduardo, who are both of Spanish heritage.

My last day, Friday 26 November, we decided to take a horse and carriage ride around the Central Park before heading off to The Wright Restaurant in the Guggenheim.  Here we found a gem in the restaurant – small but classy and with great food at very reasonable prices.  We then decided to brave the famous black Friday sales – the busiest shopping day of the year.  The crowds were horrendous on 5th Ave and not made any easier by the appearance of Justin Bieber and his thousands of screaming fans at Barnes and Noble Bookstore!  The prices and atmosphere certainly made the effort worthwhile though.  Late afternoon, we went back to The Standard Hotel to watch the sunset from the amazing top of the world bar on the 18th floor. The views from here are spectacular.  To add it, the floors are sprinkled with gold dust and the restrooms are a must “see it to believe”.  A pre dinner drink here is highly recommendable and my clients will surely appreciate this tip.  From there we went to witness the craziness of Times Square for photos and late night shopping at Forever 21.

I left NY the next morning, Saturday 27 November very reluctantly but already started making plans for my next visit, which will definitely include another stay at the fabulous New York Palace.  No one can beat its location and service. I’ve joined every other visitor and fallen in love with New York.