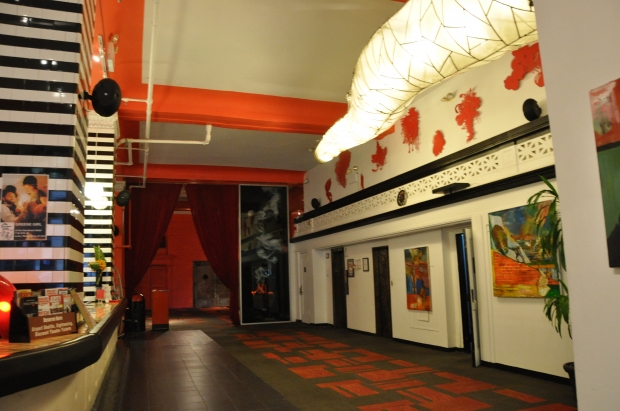 After making several attempts to get a connecting flight to NY on the same day on 3 November, I decided to stay the night in Cancun as planned.  I arrived at the ADO Bus Terminal and was welcomed by the persistent Mexican rain. Sarah and Jennifer, whom I both met in Vinales, recommended that I stay in a nice hostel in town.  At the terminal, I was surprised to meet Sarah and James and found out that they’re also staying the night in Cancun for a lay over before flying out to Cuba for another 10-day visit. Sarah and James are from Melbourne and the second Australians that I have met since Day 1 in Havana.

After taking a peak of the first hotel choice of Sarah and James, which is just two blocks from ADO Bus Station, they agreed to take a look at Hostel Mundo Joven -the place that was recommended for me to stay. I was thankful that they’re only a block away from each other as walking in the rain with a suitcase would be an ordeal.  We decided to stay at Hostel Mundo Joven.  The hostel is a three month-old modern building with an inimitable style.  It is located on Av. Uxmal and close to some bars, which make the place a little noisy at night and difficult for dorm guests to get a tranquil and good night sleep.  It’s a 4-storey building with a 92-bed capacity – dorms and private rooms available with ensuite bathrooms.  Private rooms, on the top floor and deck bar, have Jacuzzi.  There is laundry facility nearby which was ideal for someone like me who has been travelling for 3 weeks to avail the over night laundry service for only MXN 13 per kg.

Sarah and I checked out the rooms.  From what was available, we decided to stay and booked the private room with jacuzzi.  The room was slightly bigger and has an extra room with a sofa bed couch. Each room has a flat screen.  I volunteered to take the sofa bed couch. The room costs USD65 and worked out to be just over USD20 per person.

Sarah and James make a lovely couple. They’re great to be with and we’ve had a lot of laughs together. This is my first hostel experience and was very blessed that I met Sarah & James. I comfortably enjoyed my first hostel initiation.

We culminated our night with a dinner at a nearby restaurant that James read on the Lonely Planet.  We had nachos for entrée and tacos chorizo for the main course.  We were also joined by Christine, a new found friend of Sarah and James, who has been travelling in Mexico for 3 weeks, The restaurant did not serve any alcohol beverages so we decided to wander around the area and luckily found arrays of restaurants and bars on Av. Yaxchilan. We had our 2 for 1 cocktail drink at El Asador bar. Flower and souvenir vendors approached our table every now and then.

In the midst of our cocktail drinking and guffaws, someone who was selling a fridge magnet photo frame approached us.  The guy was very much insistent and tried to convince James that it would be a perfect and good romantic shot for him being the only thorn among the three roses.  It became a joke topic because of his usage of the word romantic. I took the opportunity and liberty of pulling out my digital camera and asked the waiter to take our own romantic shot.  After giving him the instruction how to use the camera, he gave the camera to his co- worker and sat next to Sarah for a striking pose.  We just laughed as he obviously misunderstood that the photo was for our group.  Ultimately, he got his romantic photo snap.

Food and drinks are very expensive at Cancun Terminal. It is advisable that you grab a bite in downtown. A meal costs MXN150 average and MXN 130 for margarita.  Whereas last night we only paid MXP51 for a 2 for 1 deal at El Asador.

Finally, I boarded AA 1674 bound for New York on Thursday, 4 November.  As the aircraft was taxing, and while I was looking out through the window, a red snake of about 1.5 metre long caught my attention as it briskly crawled on the tarmac.

I was probably the only person who noticed the red snake since most of the passengers were still busy situating themselves and their luggage and some were taking orders from the flight attendants.  Dora, one of the flight attendants, approached me and offered me Baileys.  By the end of the flight, I polished off the entire airline’s 5 mini bottles of Baileys.  I generally do not drink while on the plane but I realised how long I have missed having Baileys.  Dora was lovely and very attentive throughout the flight.  I never really liked any of the AA flight service within US but this trip was exceptional and the food served was more edible.  I enjoyed my meal set composed of a steak with rice, salad, bread and flan de leche for dessert whilst being entertained with the amazing sunset from my window.

I arrived at the JFK Airport in NYC at 9:30 pm and was welcomed by the typical November weather – raining and wet. I finally reached Girshwin Hotel at 10.30pm.

I visited Girshwin Hotel before my Cuban sojourn to check out their dormitory accommodation.  After the ocular, I decided to pre-book for my first 2 nights. And having an awesome share hostel room experience in Cancun with Sarah and James who are complete strangers, I was expecting a similar experience in Girshwin.

As I walked in to my assigned room, I saw 2 bunk beds for 4 supposedly to be occupied and shared by mixed gender.  And to my surprise, I didn’t expect to be sharing the room with 3 gentlemen. I bravely introduced myself to Jose, who happens to be the only one awake.  Then soon I met Benjamin entering the room.  He just got out from the bathroom.  My other roommate was soundly asleep.  Within 5 minutes, after I found a spot to store my suitcase, I decided to leave the room feeling uncomfortable. I told myself that my family would totally be in shocked if they hear about the room situation.

I went across the hall where Lisa’s dormitory room was and decided to hang out in her room for a bit, until I felt comfortably ready to go back to my room.  Lisa and I met earlier at the reception desk while I was checking in.  One of the reasons why I stayed at Girshwin is because of its friendly ambience but never anticipated that my current room situation will likely happen.  Lisa is travelling with her 17 year old daughter Kylie.  Lisa and her daughter shared their room with two females from Scotland.

I had to report the funny room situation to my cousin Mark, who lives in San Francisco, and ended up chatting with him for over an hour using the front desk telephone, as there are no telephones set up in the rooms.  I eventually went back to my room at 2 am and tiptoed quietly into my bunk bed so as not to disturb my roommates, and felt asleep the moment my head hit the pillow.

The following morning, Friday, 5 November, I was woken up by the light glare.  As I tried to get up from my bed, I finally saw my other roommate getting ready to leave the room.  We had a brief exchange of “hi and hello.” I decided to miss breakfast that I arranged with Lisa and Kylie, and went back to bed to enjoy an extra hour sleep until 9:45am. That morning I found out that it was Jose’s last day and he has been in NY for a week.  He is professional photographer from Monterrey, Mexico. I also found out that Benjamin is a budding model from Portland, Oregon.  I then realised why I initially decided to stay in a shared type of accommodation – to meet people.  Obviously the types and interesting people you meet and get acquainted is endless.  They will remain strangers in your eyes only if you allow them to be. 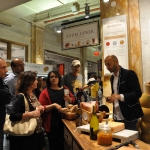 That day I hang out with my cousin Leonie and had lunch at one of my favourite food spots, Eataly.  Here I met Kate from New York who’s seated next to me while I was relishing the pizza and pasta that I ordered.

That evening I had the chance to talk with my roommate Alex. He just recently moved from France to work in New York.  He was temporarily staying at Gershwin while scouting for an apartment to rent.  Later that evening, Alison, a young writer from Belize, joined us in.

The greatest disadvantage traveling solo is that you have no one to share the cost with. There is the unfair single supplement in your hotel/lodging that can add up to hundreds of your hard earned money.  Sometimes you will be given a very small, poky table away from other’s guest eyes, which in some instances I don’t mind at all.  But when this situation happens all the time, it can apparently be a bit lonely if you have no one to talk with, and lucky if you end up with a server or the bartender who can engage in a good conversation with you. The decision of hostelling is to save paying for single supplement and have the opportunity to meet people, and this opportunity along with the experience is PRICELESS!

Posted by Lisa – American Expresss29 Nov 2010 11:59:29 AM
Well done Michelle, sharing a room with strangers you are finally a real traveller!