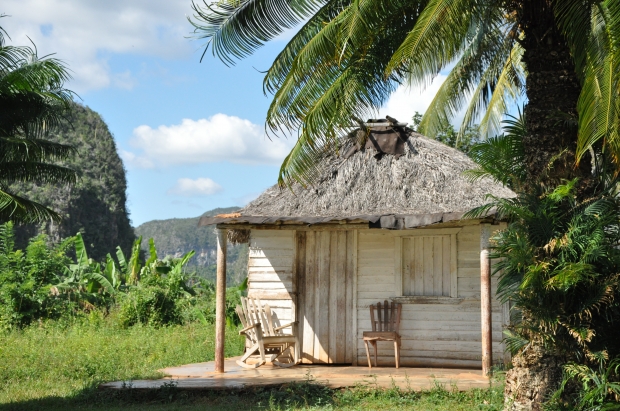 After a 3hr 30mins journey from Havana and having no concept of what Vinales has to offer, I felt awe struck when I witnessed the beauty and serenity of its valleys.

I arrived at the Vinales Terminal on Sunday 31 October, at exactly 12.30pm and spotted a girl holding up on her left hand a white board with my name written and on her right hand a single red rose.  She’s Yacquilin, daughter of Rene’s contact (Jovita y Papo). I introduced myself to her and she handed me the red rose, which made me feel safe and welcomed.

There is nothing much to worry if you failed to make reservation upon arrival in Vinales.  Owners of Casa Particulares (private house) typically wait at the terminal and ready to promote and offer their homes to out of town visitors, especially foreigners.  You definitely have an array of choices and have the liberty to pick and choose the type of casa that meets and fits your needs.  My tip is to choose the casas that are not too close from the main street to escape from the hustle and bustle of the town. 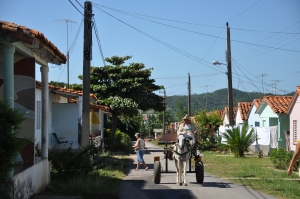 Jovita y Papo’s casa is 3 blocks away from the main road and is located in a very nice neighbourhood – surrounded by lovely looking houses and over looking the mountains.  The house is very clean and tidy and is painted in blue and white. It has a small balcony with 2 connecting doors – one to the main house and the other one to the room assigned to me.  The bathroom is clean but the toilet has a pull flush mechanism.
I was introduced to Jovita’s nephew, Livan who can speak English as well as Italian and French.  Livan became my personal guide during my stay in Vinales.  His 3 aunts and cousins are both in the casa particulares business.  I would consider Livan as the designated resident entertainer and translator/guide of the family business.

I spent my first day touring around and exploring the beautiful Vinales National Park with Livan. It was amazing to see the beautiful mountains surrounding the valley and the interesting little farmhouses along the beans and tobacco fields.  I was also entertained to see the wandering animals – like dogs, horses, cows, and chickens. There were also many tourists horse riding and in horse carriages/taxis. 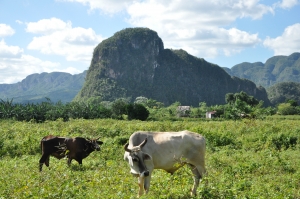 At one point, while we were strolling along main road, I have noticed the prominent presence of policemen – 4 on their motorbikes, 3 in their cars, and 2 trucks full of them.  I consulted Livan on the situation and he explained to me that the scene is typical when there’s a big music festival and dance party happening in the valley.  Policemen are there to monitor and detect the use and sale of illegal drugs.

As we were approaching to the party venue, I could hear the loud music and Livan, who loves to dance was enticed to do some salsa moves.  After an hour of trek in the heat, we finally got to the campsite and met his friends Josebel, Frank and Flaco and stayed at the site for 45 minutes.

It was indeed a tiring day and quite an ordeal to walk back to the casa.  All I was looking forward to was a refreshing and cold glass of sangria that I pre-ordered from Jovita.  I arrived in the casa just before 5pm and sad to find out that Jovita could not make the Sangria, as she could not find the right wine from the shop.  She decided to offer me instead a Mojito and discovered that her Mojito is so far the best I have ever tasted in Cuba. I sat by the veranda as I enjoyed sipping my mojito and witnessing the magical sun that was about to set. 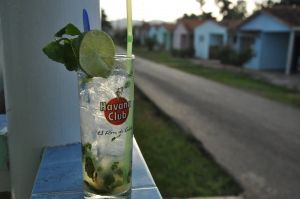 I ended my night early, as I was still feeling exhausted from the afternoon walk.

On Monday, 1 November, after breakfast, I moved to Casa de Chicha owned by Jovita’s sister, Olimpia, as her casa was pre booked for someone else. Olimpia’s casa did not have an AC but the substitute 2 fans worked perfectly well for me.  The house didn’t look as new, but was comfortable.  My only complaint was the bathroom was not tiled and the toilet once again was a pull up flush. 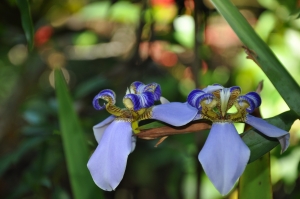 I started my day by visiting the Botanical Garden, which is 1 km away from  Olimpia’s casa.  To get through the garden and witness its hidden jewel and eclectic collection of flowers, fruit trees and medicinal plants, you will enter through a small-gated house. I found out later that the lady tending the garden is Livan’s Aunt. I spent nearly half an hour exploring the garden.

I went back to the casa to savour a nice ham & cheese sandwich for lunch that Olimpia prepared for me.  After the quick sumptuous lunch, I took off and got on the Vinales Bus Tour to explore more of the beautiful valleys of Vinales.

Our first stop was the Ermita Hotel. After that, we headed to the lookout point, which was located at Hotel Los Jazmines. Then, we drove back through the Main Road of Vinales and headed to the painted cave Mural de la Prehistoria then towards Palenque de los Cimarones then onto Cueva del Indio (Cave of the Indian), which is the most visited cave in the valley of Vinales.  I paid CUC5 for the entrance fee and decided to stay and explore the place for roughly 45 minutes.  I boarded on a boat that brought us to the other side of the cave where you can buy some souvenirs or have a quick drink at the restaurant.  And if you are more daring and adventurous, you can either take a quick horse ride or a photo with the buffalo.  Here I met Coralie from France and her Japanese boyfriend. I got back to the centre by 4pm and walked back to Jovita’s house for another Mojito treat and to gaze another amazing sunset episode. 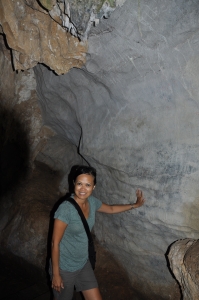 After an enjoyable lobster dinner, Livan came to Olimpia’s casa as he was excited to see the pictures I took during the two days.  I showed him the pictures and he thinks it was brilliant of me to produce such quick slideshow with music without knowing that it was a point and click exercise.  I also walked over to Jovita’s casa to show the photos and had the chance to meet Sarah (from UK), Jennifer and her boyfriend from Sweden.  We exchanged some stories and guffaws over a glass of mojitos.

On Tuesday, 2 November, I realized that it was my last day in Vinales and started feeling a little emotional. I then asked myself, which among the hot spots in Cuba that I have been to I consider the best?  Apart from experiencing the true spirit of the smiling island of Cuba, I equally felt in love with both Veradero beach and Vinales.

It’s finally time for me to say my warm goodbye to the gorgeous Vinales.  At the bus stop, I even felt sadden when I saw Livan along with his beautiful little niece Nadiares.  At the station also had the chance to meet Francesco who works at the bus station and also does painting as a past time hobby.  He certainly has the potential to be one of the greatest artists in Central America.

I finally arrived Havana at 5.30pm. And as soon as I reached Aurora’s casa, I dropped off my luggage and went directly to Restaurant Union Francesca  – definitely considered my favourite restaurant in Havana.

On my last day in Cuba, Wednesday, 3 November I finally felt the end of my Cuban travel experience when I arrived at Havana airport following a 25 minutes travelling through the traffic in the city of Havana.  Oh no, wait!  My Cuban experience cannot end without having to endure another Cuban Airline flight CU152.  The landing has been smooth and steady on both occasions with CU, however, I was farewelled by the usual mist but this time it was coming out under the passenger seats.  As I was seated on the last 2 rows, I could see the enormous amount of mist coming out.  I could not help myself but to take a video (click here to view) of this sight for all of you to view.  I will certainly fly with Tiger Airways anytime.

I was intrigued before coming to Cuba now I know from the bottom of my heart, I am leaving Cuba with great memories of beautiful valleys of Vinales, wonderful hospitality from all the casa family where I shared the joy of the locals living, exquisite Varadero beach, amazing architectures of Havana & Trinidad, and most of all the shared laughs and most enjoyed company of my new friends.